As parts of America suffer record cold temperatures and after the previous years’ devastating hurricanes and the terrible fire in California, you might be inclined to believe there is something in the scientist’s dire warnings about climate change.

Donald Trump thinks it’s a hoax, but the evidence points to something serious going on.

As any individual concerned about trying to their bit to help out, we do have some choices and lifestyle decisions to make. END_OF_DOCUMENT_TOKEN_TO_BE_REPLACED

Traditional finance and investment theories such as Modern Portfolio Theory (MPT) and Capital Asset Pricing Model (CAPM), are based on certain assumptions about how investors behave including such as the following:

This isn’t the full list, but perhaps you can see some of the potential flaws in these assumptions? END_OF_DOCUMENT_TOKEN_TO_BE_REPLACED 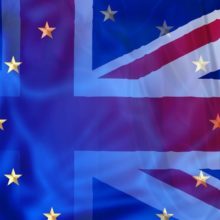 Brexit – What does it mean for my investments?

Following last week’s EU Referendum vote, there is a high level of uncertainty over what this will mean for the country on many levels.

To attempt to calm market fears, there have been statements made from the Governor of the Bank of England, Mark Carney and this morning from George Osbourne.

At this time there is no clear understanding what leaving the EU will mean for investing in short term, but I believe that the long term nature of our investment philosophy and approach would recommend that although these are uncharted waters, staying in your investment seat at this time is the correct approach.

I work closely with Dimensional Fund Advisers and I share an extract from their newsletter which
better puts in to context our current situation:

“Dimensional has nearly 35 years of experience managing portfolios, including during periods of uncertainty and heightened volatility. We monitor market events—including their impact on trading and trade settlement—very closely and consider the implications of new information as it comes to light. We are paying close attention to market mechanisms and they appear to be functioning well. Our investment philosophy and process have withstood many trying times and we remain committed.

We urge caution in allowing market movements to impact long-term asset allocation. Long-term investors recognize that risks and uncertainty are ever present in markets. A drop in prices is generally due to lower expectations of cash flows, higher discount rates, or both. In some cases, a drop is also due to investors demanding liquidity. In the current situation, some investors and economists may expect lower cash flows due to possible trade barriers that may not be implemented. Higher discount rates may be occurring due to uncertainty about changes in the economic landscape and regulations. We have seen markets increase discount rates in times of uncertainty before, resulting in lower prices and increased expected returns. However, it is difficult to know when good outcomes will materialize in the future. By attempting to time the right moment to invest or redeem, one risks not enjoying the potential benefits of such materialisations. Many of those who exit the markets miss the recoveries. What we have often seen in the past is that investors who remained in well-diversified portfolios were rewarded over time.”

I appreciate you will have questions as to how this event may impact your own financial situation and I’d be happy to hear from you at anytime to discuss this further.

Please either phone me or email to get in touch.

We will provide further information as and when things become more clear. 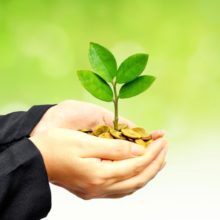 When it comes to investing, keeping an open mind about new opportunities, new approaches and seeing new trends are all valuable things to be able to do.

There is a growing public demand for businesses that they deal with to act in a socially responsible manner.

It’s clear that public sentiment towards companies that appear to flaunt the law, act in their own self-interest is strengthening. Companies like Amazon and Starbucks, whose tax strategies are deemed less than moral, can lose customer confidence.

END_OF_DOCUMENT_TOKEN_TO_BE_REPLACED

The year that wasnt

With further changes to Pensions legislation reducing the Pension Lifetime Allowance (LTA) from £1.5m to £1.25m and the maximum annual contribution from £50k to £40k, more and more people have to look for alternative solutions to investment and tax planning. END_OF_DOCUMENT_TOKEN_TO_BE_REPLACED

Are you building a fund for your retirement in a company pension scheme? If so, forthcoming changes to the taxation of pension savings could cost you dearly – unless you act swiftly.

From April, the maximum pensions saving that anyone is allowed to build, before it becomes subject to punitive taxation, reduces from £1.5m to £1.25m. This cap is called the Lifetime Allowance (LTA) and applies to an individual’s entire pension savings (apart from the state pension).

The figure may sound high but many thousands of people fall into the category – especially those in final-salary schemes who have built their entitlement through many years’ work.

But don’t despair, if you are affected, there are actions you can take before April to mitigate the potential tax charge down the line.

Saving into a pension scheme has for years attracted tax relief. However it was felt that wealthy people were getting too much tax relief and building up enormous pension pots and the LTA was introduced at £1.8m in 2012 reducing to £1.5 in 2013 and now to £1.25m in April this year.

It would be a brave man that did not anticipate further reductions in years to come.

When first introduced, the LTA used to apply only to a few thousand high earners in the UK who could afford to grow seven-figure pension pots. But the reduction in the limit, coupled with the increased costs of funding retirement promises for those who retire on final-salary-type pensions, has now pushed hundreds of thousands of people into the net.

There is some key information you need to know or find out quickly!

You need to find out what the total value of your pension savings will be, as at April 2014. This should include any legacy pension schemes with previous employers. If the total is already over £1.25m, or likely to grow beyond that sum before retirement, you can take action to retain the £1.5m LTA, subject to certain conditions.

If you are in a final salary scheme and expect to receive a pension in excess of £56,000 on retirement, this could take you over the LTA and should prompt you to take action now.

As ever HMRC have produced detailed guidance on the changes and impacts (see link below) but if you need assistance to understand the impact on you then please get in touch.

It’s a well-worn phrase that I’m sure you’ve heard before.
The grandparents start the business, it becomes successful, the next generation build it further and the grandchildren subsequently ruin it and squander the wealth.
Of course it doesn’t happen this way every time. When we look at our typical client profile we see a great similarity – Families running businesses trying to build better lives for the future generations. And leave a lasting legacy.
We have developed what I guess market-teers would call a strap-line for our business that explains what we do – “We look after families, their businesses and their wealth across the generations”
By identifying this particular niche we can see that there are common financial planning requirements that come up frequently. That’s not to say that each situation is not unique but there are similarities in what each family is trying to achieve financially.
We find that we are often referred up and down the family generations and it really helps when there is family understanding and consensus when building the financial plan. Using our cash flow modelling process also provides a long term view of how wealth and indeed the value built up in the business can help families for a great number of years.
We can establish when it might be right to exit a business and extract wealth tax efficiently for the current generation while leaving a viable firm for the next generation.
We strongly believe that as family wealth financial planners we need to take a much longer view of our clients and consider 40 years, 50 years and even longer relationships.
Taking a cross-generational view also helps with our passively engineered investment approach by allowing capital markets to reward you for investing over the much longer term. You can let the beauty of compound returns achieve the family financial goals without exposing yourself to unnecessary risk.
In other words, if 5% pa or 6% pa return over the next 30 years gets you there, then don’t aim for 10% pa and find you are exposed to greater volatility and portfolio value swings than you’d like to be.
Being smart across generations with robust tax-planning can also provide greater wealth for the family and taxes such Inheritance Tax, can be mitigated or avoided altogether by taking the long term view.
Protecting the family and the business by using third-parties to shoulder the risk if something happening to the driving family member is vitally important and again something that should be known and understood by the family group. There is little point in creating wealth only to have is lost on the death or serious illness of one individual family member.
From a cost point of view, there are other benefits to this approach. There are often family discounts to be had by pooling assets on an investment platform – we do this through our Personal Investment Account and it can lead to substantially reduced costs that apply to all members of the family group over a long period of time.
I hear that slow-cooking is now become the natural antidote to fast-food and perhaps it’s time to apply this approach to your financial planning – easy does it, take long term considered views and we might just get beyond three generations.
Please speak to us if you have any concerns that your current financial arrangements are quite what you’d hope they’d be.
Roland Oliver
October 2013 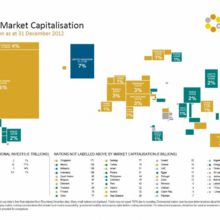 Viewing the world map by relative market capitalisation illustrates the importance of building a globally diversified portfolio and avoiding a home market bias.

This cartogram, produced by Dimensional Fund Advisors, depicts the world not according to land mass, but by the size of each country’s stock market relative to the world’s total market value (free-float adjusted).

Population, gross domestic product, exports, and other economic measures may influence where people invest. But the map offers a different way to view the universe of equity investment opportunities. If markets are efficient, global capital will migrate to destinations offering the most attractive risk-adjusted expected returns. Therefore, the relative size and growth of markets may help in assessing the political, economic, and financial forces at work in countries.

The cartogram brings into sharp relief the investible opportunity of each country relative to the world. It avoids distortions that may be created or implied by attention to economic or fundamental statistics, such as population, consumption, trade balances or GDP.

By focusing on an investment metric rather than on economic reports, the chart further reinforces the need for a disciplined, strategic approach to global asset allocation. Of course, the investment world is in motion, and these proportions will change over time as capital flows to markets offering the most attractive returns.